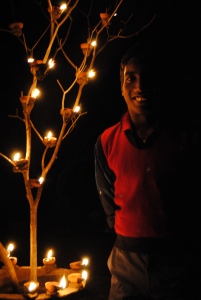 This is a post I never thought I would have to write, and have been avoiding writing for two weeks. But it is important to share with everyone as it is about a topic we love to pretend does not exist and live in denial.

On 24th July, I woke up with Baba’s message, “distressing news, Sukol committed suicide last night…” With no courage to call our parents, I asked my brother to do so. What he found have left us totally devastated, forever.

Sukol, a 20 year old Santhal boy had been growing up with us since the last decade and more. The youngest of 4 brothers, his father died due to alcoholism and mother is bedridden since 7 years due to same reason. Kali, Budhi and Som, the three elder siblings of Sukol, have been our family and everyone who know us knows that. We have been sharing, caring, laughing and crying with each all these years. Or so we believed. As Sukol’s decision has forced us to rethink our lives spent together.

Wherever we went in the world we would search for objects that would make these brothers happy. They had seen poverty, pain, suffering, loss, humiliation, discrimination and whatever little we could do to make them smile and their eyes light up we tried. In turn, they took care of us as best possible. My maternal grandmother, Dia, in the last years of her life wouldn’t listen to anyone but Kali. His elder daughter Debi has been the light of our lives.

Sukol hadn’t been the brightest of the 4 brothers, he had behavioural issues which made him the butt of jokes and he used to hide himself in Ma’s pampering. She fought, sometimes quite aggressively, for him. Ma had been teaching children from the streets in Jaipur for about 15 years and later the tribal Santhal children since nearly 20 years. She did not think much of the course curriculum taught in schools and found them quite irrelevant to the local contexts and requirements but she tried her best to adjust around. Her pride were Som who’s currently pursuing an MA at Visva Bharati University, and Sukol, who had been enrolled in a Design course with the same University. We knew the education system in India wasn’t conducive to children with creative interests and excruciating for those with special needs so Ma tried to fill in the gap with stories, games and hands-on activities.

Sukol or ‘Mistry’ has been credited with the most unique creations all his life, if there was anyone in the entire Santhal hamlets to come up with mechanical gizmos and cool designed stuff, it had to be Sukol. On a Diwali 4 years back, he dragged a small dried up tree trunk and lit it up beautifully. No one else could have thought of it. It’s been the best Diwali of my life till now! At 16, he could conjure up this marvel entirely on his own, with no help. All the photographs in this post are of that evening. 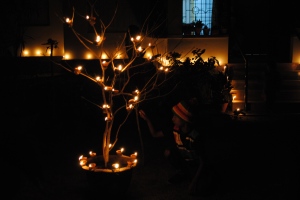 He had special affection for me, would always make something amazing like flowers of coloured crepe paper, small terracotta toys and fill me in with latest gossip about films, music and sports. He would share a lot of funny stories and wait for ‘didi’ to go home. Lately, we realised he was losing his laughter and attributed it to his school, marks and the pressures of the quite useless elementary education that our schools provide.

Finally, he completed school and got admission in a Ceramic Design 1 year Certificate course. Somehow, that course was turned into a 3 year Degree course and we still don’t know how that happened! Whose stupid idea was that? Why would you destroy people’s creativity and interest by unnecessary imposition of boring formal education? Most of the boys and girls who had enrolled for the Certificate course were from economically weaker and looking for employment that a University certified course could hopefully provide. The lesser the duration of the course the easier educating them was, these were not students who had the luxury of education but the need for it. Did anyone ask them what they required?

We were always scared that the meaningless education system, the exploitative social structure, the discriminatory attitude of people who thought that Santhal tribals were lazy, useless and Ma was wasting her time and money educating them when she could travel abroad and earn in dollars, and the infinite demands of finding a job would prove difficult. That’s why we fought for Sukol and his family.

I can relate countless stories where we have vocally and in many other ways fought to help these boys get their rights. When Sukol received a scholarship for being a tribal schoolboy, it took him a year to get a SBI bank account and an ATM card. Scholarships now are sent directly to student’s bank accounts to counter corruption. He had never entered a bank and when he did the staff refused to help and humiliated him instead. But Baba did not give up, told him to fight for his rights and fought with him. With that money, Sukol loved eating simple little things off the road. He would fall sick and while everyone teased him over his gluttony, he was always given immediate medical attention at home. He would always get the biggest bite of anything we got from outside Santiniketan. Now, that would not be required. Never.

Sukol had made two beautiful cups for Ma and Baba at Khurja this summer where he spent two months interning with a ceramic factory. They loved it, they were so excited about it and Baba put up a Facebook post of it, proudly displaying the cups. Little did they realise that tea would taste so bitter in it soon. That those would be the last handmade gifts from Sukol.

In his suicide note in Bangla, a language that Ma had taught him to read and write, he wrote twice that he did not want to live longer and hurt his Jethima and Jethu as he was failing them. What failure was he talking of? And what hurt are they now left with at the age of 70 and 80!!! No one knows that Baba, as a child of 10, lost his elder brother to suicide 70 years back due to failure in school. This is an ugly rebound for him.

Sukol also hung himself. From a mango tree at our home that we had planted together and waited every year to bear fruit. My favourite mango, Himsagar, would be devoured and some kept aside for me if I could not visit home. This year, Sukol and Som packed 20 of these for us as Dada’s family was here from the US and for nearly 25 years Dada had missed mangoes from India. Our little niece gorged on them. Baba has now got the tree uprooted. The man who wouldn’t remove a tiny plant from the entire garden has got the entire tree slashed. What hurt did Sukol think he was removing with his absence? We were hoping that the decision was spontaneous but learnt that he had treated his friends, taken another to a film and given his ATM card to him. Since when was Sukol planning all this? All this while when he was at our home, which was his home too. They all watched the women’s cricket match at Lord’s together. Such a happy occasion. Little did anyone suspect Sukol was counting the last few minutes of his life.

We are left with just questions. Where did we fail? Where did we go wrong? Did we love too little or too much? Did we scold him a lot? Did we pressurise him to study? Should we have let him give in to first TB and then alcoholism like his parents and other younger Santhal boys? Santhals in Santiniketan face unemployment, loneliness and abject poverty. Tagore had feared that and tried to draw them into mainstream nearly a century back. Did that mainstream betray them? What do we do now?

We are also left with a terrible pain and void. Emptiness. Anger. Tears, that we are too numbed to shed. Hope we gave Sukol some moments of happiness in his despair. Hope. 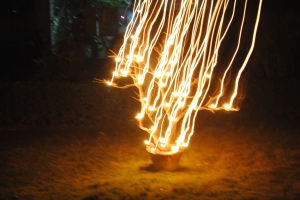 I had been desperately trying to get funds for working with designers alongside the Santhals for finding creative means of self reliance and employment. But, it’s too late for Sukol. My youngest brother who would wait to show me the newest flower he had grown and the craziest song he had heard. He is yet another statistics in the every increasing list of victims to depression, poverty, lack of access to therapy. While India is starting to discuss Zero Suicide Mission, we have to first address the stigma attached with psychological need, psychiatrist help, therapy and counselling.

The song written by Gulzar from the film Masoom never fails to strike:

13 thoughts on “With a heavy heart I write this post…”