“This urge to reduce the poor to a set of clichés has been with us for as long as there has been poverty. The poor appear, in social theory, as much as much in literature, by turns lazy or enterprising, noble or thievish, angry or passive, helpless or self-sufficient,” Mr Banerjee and Ms Duflo wrote in their seminal work, Poor Economics, which examined the real nature of poverty and how the poor reacted to incentives.

The problem, the couple said, was that the poor get admired or pitied. They are also not considered knowledgeable, and that there is nothing interesting about their economic existence. They hold out hope that “poor countries are not doomed to failure because they are poor, or because they have had an unfortunate history”. What often needs to be fought, they say, is “ignorance, ideology and inertia”.

From an article by Soutik Biswas on https://www.bbc.com/news/world-asia-india-50048519

Niranjan Sanyal would have been a very happy person if he would have been alive to hear that Prof Esther Duflo and Abjijit Banerjee of  MIT have been awarded with the Nobel Prize in Economics for attempting to alleviate poverty by working with the poor and not working ‘for’ them. This is such a huge change in the perspective of how poverty can be eliminated from the entire world.

While talking about empathy to a young generation, it is extremely essential for us to provide them with relevant case studies, theories and people who lead them. This helps them understand that stuff preached in classrooms and over conferences are actually doable. Extremely doable. 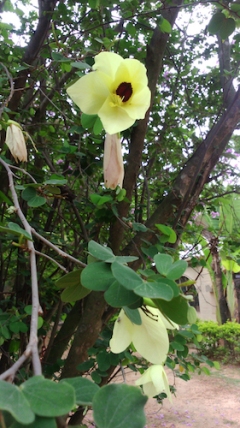 You have to visit Banalakshmi (pronounced Bonolokkhi in Bangla) to understand the impact of how extreme rural poverty, especially affecting the indigenous people, can be approached through a visionary, green approach.

Disillusioned with the system, Niranjan Sanyal, a young prince of the royal families of Puthia and Mymensingh (in present-day Bangladesh), gave up his teaching in Kolkata in the 1950’s. He had earlier given up all his claims to either family.

With his mother, Kohinoor Debi, he searched for a place for putting his education to practice, he felt he needed to go beyond just theories and discussions and work at the grassroot level with the forgotten multitudes. Gandhiji had said India lived in her villages and he wanted to explore that as a guiding principle. He finally found this place amidst the Choupahari ‘Sal’ forests, Birbhum district, about 15 kms from the small town Bolpur, adjoining Santiniketan.

The several times we had met Niranjan Babu, he had shared how barren the land had been, where now the 13 acres of lush green Banalakshmi stands, when he had come across it in in the 1950s. He had been moved by the acute poverty of the Santhals (the indigenous people of the region), the lack of formal education through which they could reach out to the government for support, added on by no knowledge of income generating skills with the abysmally low ground water levels in the region disabling them from agriculture. He would say with a gentle smile, “I could not just walk away without trying.” The kind, loving, humour filled believer of democracy, freedom and liberty was also an excellent listener. This was his biggest skill – he patiently listened to all, till his last breath.

He gave himself a lot of time to analyse the depth of the situation and focussed on the positive aspects of the challenges. He studied the locality, geography, climate, and mainly the people with their informal knowledge systems (amongst other things in sync with nature, Santhals can actually sniff the air and predict rainfall!!!). . He did this by settling down with the local population and not using his acquired higher education from urban Kolkata to brandish as a weapon upon the unsuspecting and gullible poor. Then, he found Banalakshmi, and himself.

Dr Parbati Bhattacharya, from adjoining town of Bolpur, joined him in 1964 and together they set up the area’s first Primary Health Centre. By this time a small forest had been started by Niranjan Babu, his mother and the locals. He had studied the plants which were conducive to growth in this area, which would not consume the depleting water sources yet yield fruits or other resources for the locals. Soon Sumitra Sinha and Kannan Pal joined them and they became a force to reckon with.

The next stage of his work came with utilising the yields of Banalakshmi for revenue generation. This he did very creatively by involving his mother in teaching the women of the locality in making jams, jellies, sauces and squashes. His main initial investment was in buying glass jars and bottles from the local ‘kabadiwala’ (the Indian recycler). He ensured all the cookery activity had the cleanest and safest systems (for both the creators and the consumers) in place – the locals had already became aware of the best standards in sanitation and hygiene. Many may not know, Santhals are one of the cleanest people in India and their habitats are so spic and span that these actually shine! 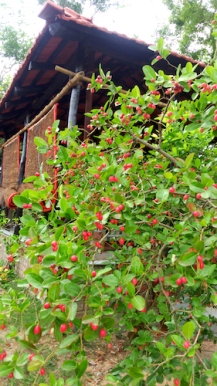 These bottled delicious, yummy and seasonal fruit and berry based extracts are available in the small sale counter at Banalakshmi. Their largest selling product is the ‘ghee’ (clarified butter) made from the milk of their cows. They are careful that, like all the indigenous people of India, they do not milk the cows when they have calved, hence depriving the new born calf of its rightful share of milk.

My favourites are their guava jelly toffees and the flat ‘aam papad’ also called ‘aam satto’ in Bengali (its strange English description is ‘mango leather’). It is made of the mangoes grown in their orchard (they do NOT add sugar so it’s not soft to eat). The ‘aam satto’ depends on the season’s highest yielding mango so each year the flavour is lip – smackingly different.

As always, I request you to kindly not create a ruckus or yell at the people working there. Put on your best behaviour and kindly respect the sanctity of the place. Banalakshmi is a lot more than a place for entertainment.

Now, for the Santiniketan and Nobel Prize for Economics connection. Would it be too far fetched to link how Nobel Laureate Rabindranath Tagore, his ideology of integrating the rural poor with the educated, both serving each other, through his experiments at Santiniketan and Sriniketan, inspired many to leave their cushy positions of power and work at the grassroots levels in India. We have to remember that when Gandhi returned to India from Africa, he was asked to find out India’s realities and one of the first places which warmly received him was Santiniketan. Gandhi called Tagore ‘Gurudev’ and Tagore later called him the ‘Mahatma’. Though there were several ideological differences, both mutually respected and inspired each other a lot. Nobel Laureate Amartya Sen grew up in Santiniketan and his ‘Pratichi’ Trust is based there. Tagore had himself named him ‘Amartya’ and had greatly influenced his thought of creating a barrier less, inclusive society.

Next time you visit Banalakshmi – meaning the Goddess of Wealth of the forests – it would be nice to walk into their mango orchard or just sit, relax, and introspect. The world falls into its right place here 🙂 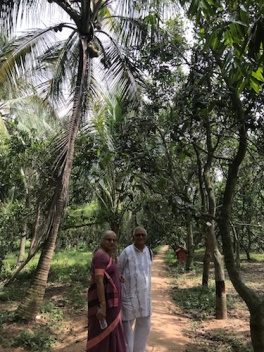 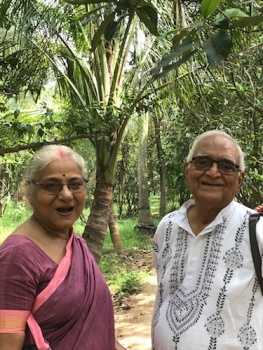 To read more on Santiniketan and the Tagores:

All photos in all the posts are by the author, check VarnikaDesigns on Instagram and Facebook for more photos and videos

2 thoughts on “Nobel Prize for Economics & the Santiniketan connection”