“The children of today will make the India of tomorrow. The way we bring them up will determine the future of the country.”

In the scorching summer month of May, the NGO Hamaara Sapna had organised a summer camp for which I was a facilitator for both their Tardeo and Dharavi centres. This NGO has been initiated in 2012 by Mrs Minal Bajaj for the Jamnalal Bajaj Trust. You will find its details here: http://www.jamnalalbajajfoundation.org/beyond-profit/community-development/hamaara-sapna

I have been associated with them since the last three years for various interactive sessions and museum visits, mostly with their women respondents (the NGO is mainly for them). It is a very humbling experience, every single time…

The stories from the children! A really exuberant lot at both the centres. They were present as both the centres were running the summer camp during their vacations. They definitely felt powerful taking over their mothers’ NGO space 🙂 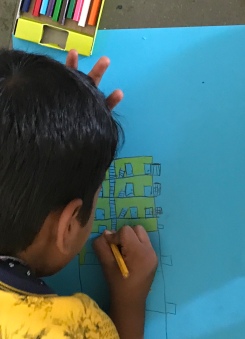 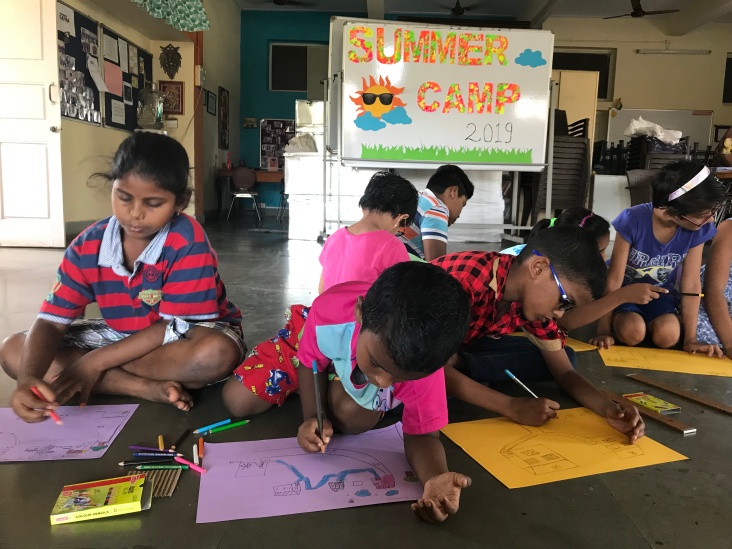 The two day sessions with children had them think deep and remember their route from their school to home and back, and draw what they saw as a map. There was no restriction on their manner of expression. They had to look at their route from one of the following: ground level, like a bird or from under the ground. 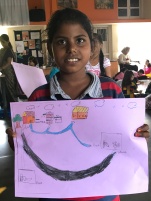 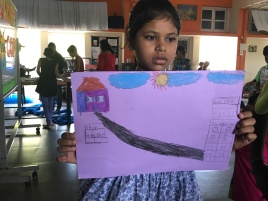 I always try to focus on the girls’ and they are initially very shy and scared but once they realise no one here is going to scold them then they run amok! Both Diganta and Mrunal are so loving and caring with everyone.

I had already presented to them several map types and artists’ works from all over the world – from the Tagores to Picasso – so now they realised they could experiment. Sadly, their schools force them to draw only in a certain rigid manner so it took them some time to unlearn but children find it easy to break rules!!! 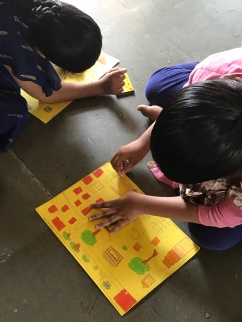 of course, they wanted selfies and groupfies 🙂 and, taught me new angles! 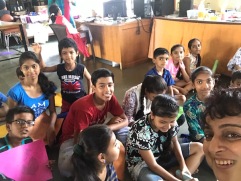 The stories of the children from the Dharavi centre was very different. 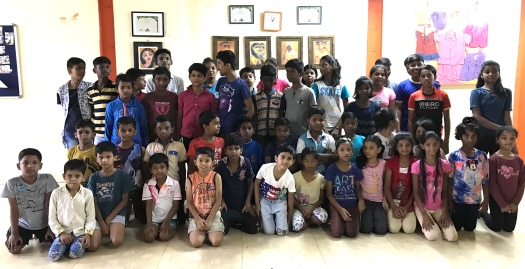 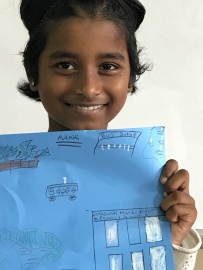 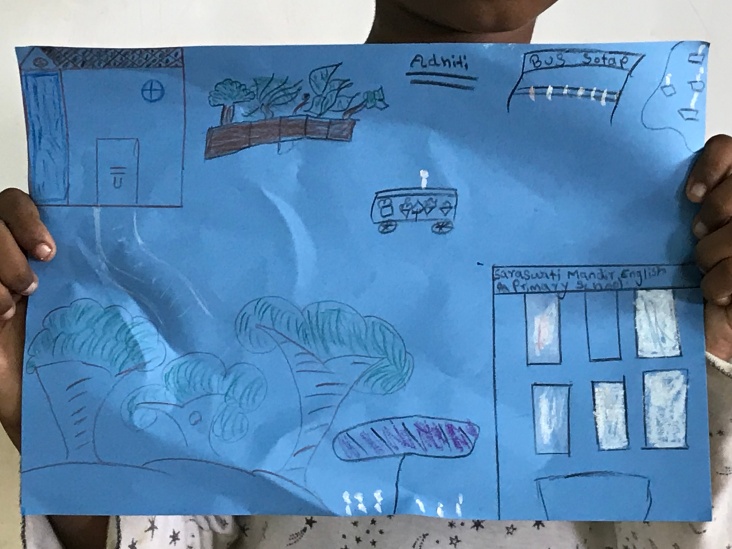 Living in a cloistered, space starved huge slum, surrounded by incessant traffic and dirty open drains, these children could hardly visualise anything from a height.

Some of them drew their favourite spots along the route, like candy stores, street hawkers or a bus stand. 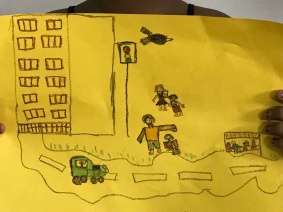 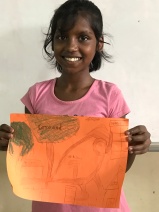 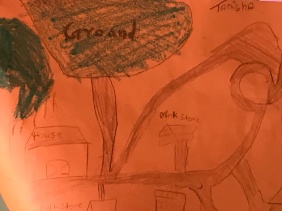 Most of them haven’t ever stepped outside their narrow lanes in the slum so they couldn’t understand scale in comparison.

They were boisterous, the boys much more aggressive than the girls. 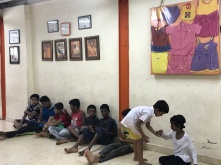 Some always are dreamers, love to fly and look beyond what’s around 🙂

The women respondents worked with me on two cultural mapping sessions where we discovered so many memories hidden within us, mostly from childhood. I tried to link these memories in connection to the cultural objects they valued. It ranged from cooking, jewellery to rangoli (handmade floor patterns) designs.

Some were very proud to say their families valued them for their culinary skills while some described how each festival comes alive through their participation. 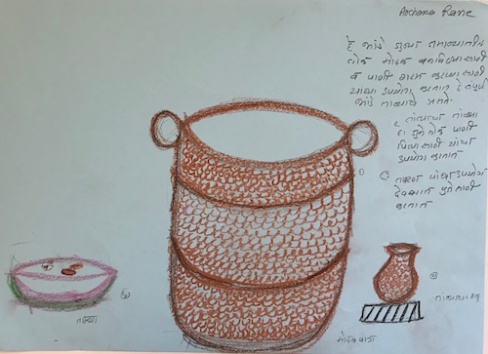 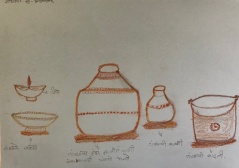 They remembered their childhood, the swing in their backyards, the smell of wet earth (petrichor), the huge trees and their families, especially mothers. Hardly any woman spoke of their fathers I realised. They drew, wrote poems, elaborate recipes and chatted on. As if some parts of their childhood was re created! These sessions became mixed with nostalgia, melancholy and sheer glee 🙂 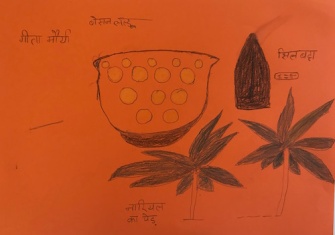 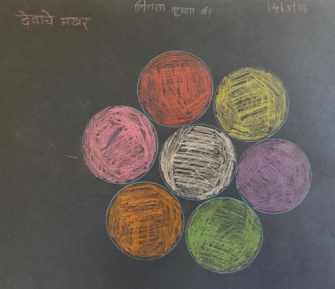 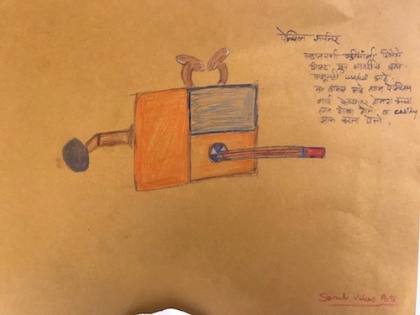 When one elderly lady said she knew nothing and had no skills, the others reminded her how much her daughters-in-law and grandchildren adored her. Then with her eyes shining she told us with absolute humility all that she did for them, as “after all, when we get someone’s daughter home we have to become their mothers and treat them like our own daughters.” Such wisdom and practicality – wish we meet more such strong willed women. 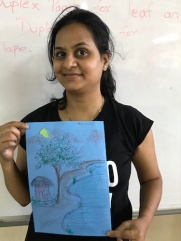 The women at the Dharavi were far more inhibited, lesser in number and expected the sessions to teach them something that would add to their meagre incomes. Most of the women from the Tardeo centre above were financially better than those from Dharavi. We should remember that Dharavi is the largest slum in Asia!

The giggles were less, memories more painful and a lot of things hidden were best kept hidden! 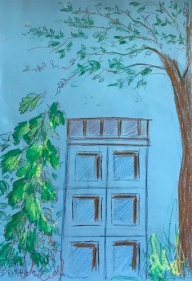 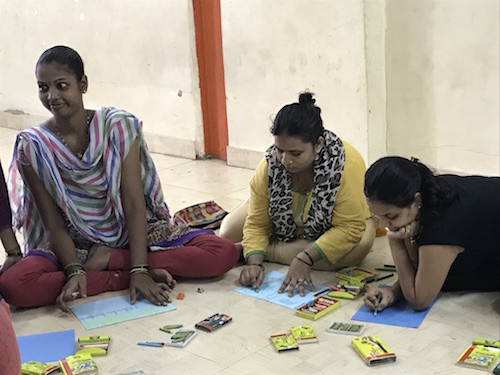 Many thanks to Mrs Minal Bajaj for this delightful initiative, every respondent is so happy to visit the Hamaara Sapna centres.

Mrunal, Diganta and are powerfully positive people to have around 🙂

All photos by the author. More photos and vidoes on social media

3 thoughts on “Their stories, for us…this Children’s Day :)”